By Kieran Mccartan, University of the West of England

An app on offer in the US says it can determine whether the person you are dating has anything to hide, using facial recognition to see if they are on the sex offenders register.

This should make us question not only whether we can rely on such information to make decisions about our relationships, but also whether we want to.

The birth of registers

Crime is constantly covered in the press. This already high profile is even higher for sexual offences and we’ve seen an increase, over the past 20 years, in policy and legislation related to these areas. One example of this is the creation of a centrally held enforced offenders register.

Anyone who currently commits a sexual offence in the UK, including youth offenders, will have all their salient details recorded and kept by the state for a predetermined period of time linked to the seriousness of their offence, their level of dangerousness and risk of re-offending. This is now being introduced with respect to domestic violence perpetrators too.

The first sex offenders register was started in the US more than 100 years ago and a version now exists in most western countries. The US sex offender register is a publicly available and publicly accessible database that contains all information relating to individuals convicted of a sexual offence, including rape, public nudity, and downloading sexual abuse imagery or illegal pornography. The rationale behind this is that it informs the public, increases public safety, enables the monitoring of sex offenders in the community and assists law enforcement.

But research generally contradicts this perception and indicates that having a physically accessible sex offenders register can negatively affect sex offender management in the community and undermine public safety.

The UK sex offender register is not publicly accessible. The criminal justice system can choose to disclose information to the public (across all of the UK), or selected members of that public, or, in certain parts of the UK, the public can request sex offender information formally via the police or a an accredited charity. That means public access is more restrained and information is less likely to be inappropriately obtained.

So there’s an app for that

Over the past few years there has been an increase in the number of apps that offer to check the whereabouts of sex offenders in local communities; particularly in the US. These apps are often created and maintained by private companies that feed off information already freely available on the internet, which in itself raises the question of whether they are always up to date and appropriately maintained. Existing apps include those which enable the user to pinpoint sex offenders among their neighbours as well as uncover past offences by other individuals that they know.

As the UK’s sex offenders register is not publicly available or accessible, there are no legal sites or apps that formally share sex offender information like in the US. The business of selling on such information has therefore not taken off in the same way but that doesn’t stop it from happening informally, via sites like the now defunct letzgo hunting. These are based on what information is freely available on the inherent or on personal and local knowledge. Because they rely on even less official information, they are more likely to be incorrect compared to those in the US.

There may not be the same number of apps on offer but the doesn’t mean the UK shouldn’t watch closely to monitor how these services operate. The stakes could be all the more high in a country where official information is hard to come by.

The end of trust

All this raises a host of questions about how relationships function in modern society and how important trust and honesty are to us. The notion that you can check whether a new partner has offending history suggests a less trusting and more suspicious approach to relationships, as well as an attempt to foresee and future-proof any potential problems.

Does checking an app to see if a potential partner has a criminal history give a cast-iron guarantee of safety, security and low risk of emotional, psychological or physical harm? Of course not. Does it make the relationship more likely to fail? That isn’t clear. Does it raise people’s levels of fear, concern, and mistrust? Potentially.

Sex offender databases contain vast amounts of information, given that to be put on one, a person needs to commit a crime, be caught, prosecuted and sentenced. That data needs to be properly stored by the authorities and maintained to keep it up to date. To make the information work in an app, a lot needs to be done to increase reliability and accuracy, which cannot be guaranteed. When we turn on these apps, we should probably question whether it is appropriate to base significant decisions on potentially problematic information when we could always just ask a new partner the relevant questions and trust their response.

Kieran Mccartan does not work for, consult to, own shares in or receive funding from any company or organisation that would benefit from this article, and has no relevant affiliations. 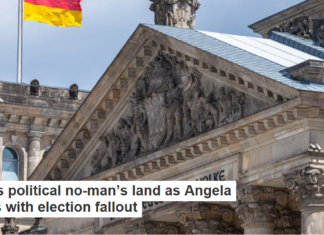 Staff Writer - November 21, 2017
Daniel Hough, University of Sussex Angela Merkel is in trouble. Serious trouble. Negotiations to form the next German government have collapsed dramatically. Quite where the...

Rising prices: why the global drive to keep food cheap is...