You might assume that when it comes to poker anything goes. Isn’t it all about bluffing and lying? Perhaps, but there are of course still a set of rules, and to break these would constitute cheating. But, there are inevitably also some blurred lines, a few opportunities for manipulation. And there are things you definitely shouldn’t do but which are just about within the rules of the game – if not the spirit of it.

It’s fairly easy to give definite examples of cheating in poker. You can’t look at your opponent’s cards to gain an unfair advantage (though if they are careless enough to give you an inadvertent glimpse, well it’s not your fault, is it … ) or gain access to any information about their cards without their knowledge (for example by having a confederate stand behind your opponent and signal to you, or using a deck of marked cards).

Similarly, there should be no collaboration between players, or between the players and the dealer. Generally speaking, this is only likely to happen in “live” games (as opposed to online games). Casinos and card rooms do their best to stamp out any such attempts to cheat.

Poker is a game that revolves around deception. So use of various psychological techniques that help you ascertain information from your opponent about their hand are run of the mill. Some, for example, observe their opponent’s body language and try to use this information to gauge the strength of their adversary’s cards. When an opponent looks away from the table for example, this may indicate an extremely good hand.

Other players concentrate on using “speech play”, talking to their opponent in order to trick them into giving responses which reveal information about their hand. A good player will use a combination of both techniques, observing players when they are relaxed to gauge their “normal” behaviour (creating a “baseline”), and then looking for deviations from this when they are playing against them directly. Behaviours by an opponent which might give away the strength of their hand are called “tells”.

Somewhere in between the legal and the illegal there’s a grey area that some consider to be cheating and some consider to be perfectly acceptable. Such actions are referred to as “angle shooting”. This is where players exploit weaknesses within the rules to gain an unfair advantage.

An example. Imagine all of the betting is complete and the time has come to show your cards. Player One, who believes that they have a weaker hand than their opponent (Player Two) might falsely declare their hand without showing it, for example claiming that they have a flush, in the hope that Player Two has a weaker hand and will just “muck” their hand (discard it without showing). Player One will then show their hand (a legal requirement to win a hand at showdown) and claim that they were only joking about having a flush; but because Player Two has thrown their hand away, they are no longer in the game.

All of the chips will go to Player One regardless of whether or not they have the strongest hand. Technically, Player One has not done anything wrong (some players do joke about these things), but such actions fly in the face of the spirit of the game of poker.

But when large sums of money are at stake, some players will stop at nothing to win. Angle shooting isn’t just confined to games of poker between friends, but can occur in large, well-organised tournaments held in respectable casinos – although such incidents are quite rare. Angle shooting can be particularly effective against novice, or unwary, players.

Deception is part and parcel of poker – and for many it is one of the main attractions of the game: there is nothing more satisfying as a poker player than when you successfully bluff an opponent. Cheating your opponent is unacceptable and against the rules. And as to the grey area in between? That’s something you’ll have to talk out with your conscience.

Paul Seager does not work for, consult to, own shares in or receive funding from any company or organisation that would benefit from this article, and has no relevant affiliations. 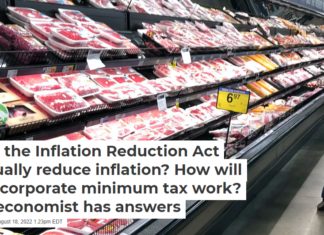 Will the Inflation Reduction Act actually reduce inflation? How will the...

Staff Writer - August 18, 2022
Nirupama Rao, University of Michigan The U.S. is about to spend US$490 billion over 10 years on reducing greenhouse...