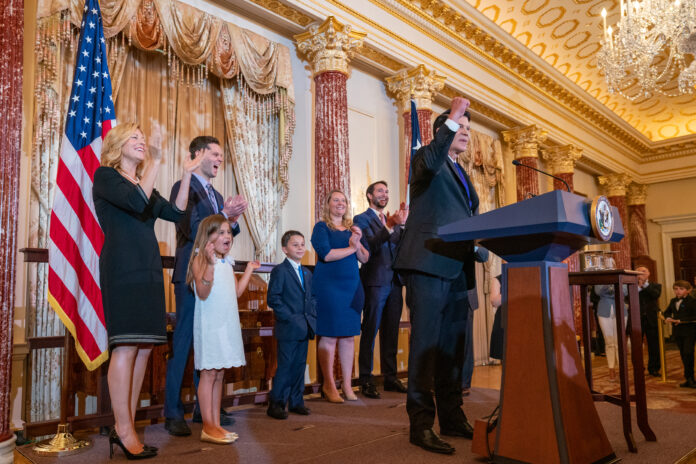 “If You Want a Friend in Washington, Get a Dog.”
Krach Did Something Better… 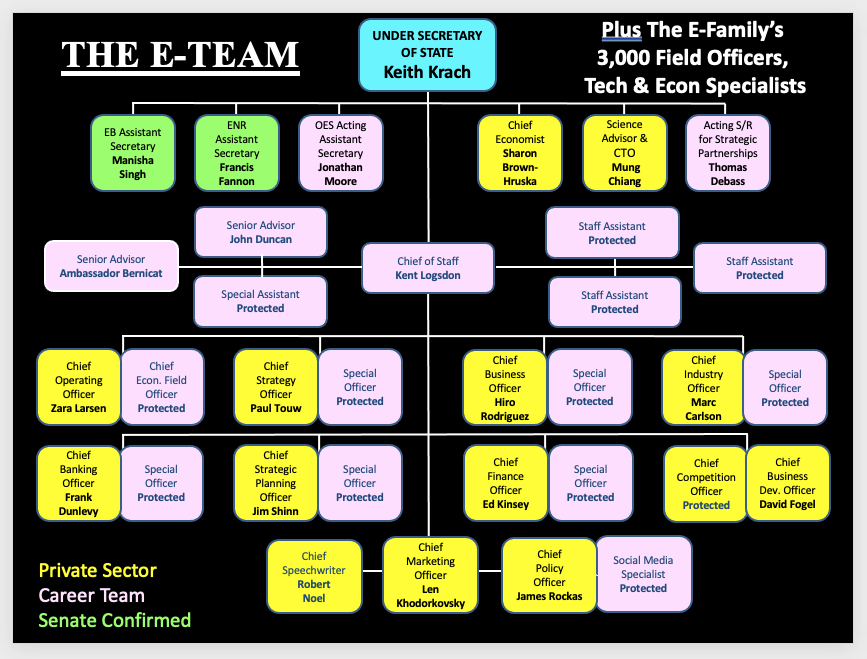 In Krach’s Purdue Commencement Address, he told the story of how when he took his leap into government service to run U.S. economic diplomacy, he was given the advice that if he wanted a friend in Washington, he should get a dog. He, said, “We already had one. So, instead I did something better. I brought in a trusted team of battle tested hi-tech transformational leaders, which included a bevy of Boilermakers like Marc Carlson, my lifelong business partner, and of course the amazing Dean Mung and Zara Larsen, that young lady who sat right next to me in my first Engineering class who graduated with a 4.0.”

In Krach’s 500 person swearing in ceremony, he called his long title of Under Secretary of State for Economic Growth, Energy, and the Environment a doozy, and told the crowd that even Mama Krach said, “Keitzy, you are a big shot now. Can’t you get yourself a simpler title?”

After the laughter, he looked down from the podium right into his mother’s eyes and whispered not too softly, “Ma, you’ll be glad to know in the Fed Gov’t, I’m affectionately referred to simply as ‘E.’ And if anyone asks, it stands for Excellence. In the E bureau, we have a saying that ‘a stranger is just a member of the E family we haven’t met yet.’ So, congratulations to all of you on joining Team Excellence.”

The True North of the Unsung Heroes 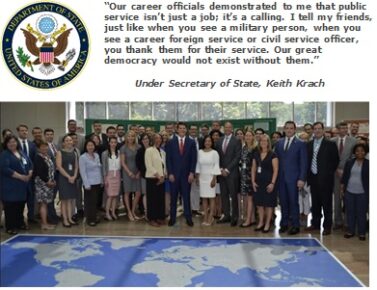 Krach’s CEO experience taught him that the organization with the best people wins, and diversity of thought is the catalyst for genius. And the first and most crucial step for any mission of significance or scale is to build a high-performance team. He had some of the finest foreign service officers working on his “E” team, who were driven, dedicated, and brilliant. “Some of them could speak four to seven languages. Their North Star is always National Security, and they work their tails off. And regardless of the drama in D.C. or around the world, they are always professional, with the utmost dedication to the country.” Krach says, “Just like when you see someone in uniform or served in the military, when you meet a career officer in the State Department, you should always thank them for their service, because they are unsung heroes.”

However, one thing that they hadn’t experienced is getting bloody on the battlefield of technological competition. So, Krach did something unprecedented. He brought in a dozen battle-tested hi-tech entrepreneurs, technologists, and results-oriented-executives; paired them with the foreign service officers in his front office, and organized them into a lean, entrepreneurial, company-like structure to complement his team of 3,000 economic officers in the field and bureaus. The combination of the diverse group of Silicon Valley veterans combined with the elite diplomatic corps was magical. Krach called bringing the best together a 60/60 deal, because both parties not only respected but learned so much from each other.

Krach had worked side by side in Silicon Valley or at General Motors with most of the private sector members of the team. However, when it came to finding the State Department’s Science and Technology Advisor, the position had traditionally been held by an earth scientist. Krach wanted to fill it with somebody with deep technology credentials, preferably from academia.  Right before Krach was unanimously confirmed by the Senate, he met with Purdue’s Dean of Engineering, Mung Chiang, who was out in Silicon Valley on a fund-raising trip.

Krach thinking that Mung was tied up with a capital campaign for Purdue, confided in him and said, “I know you guys travel in packs. Do you know from your academic network who has the qualifications and would be interested in serving the country?” Mung said he would think of some possible candidates. Mung called up two days later and said, “I am sure you already have some amazing candidates, but I would like to put my hat in the ring.” Krach said he almost dropped the phone in disbelief, and asked Mung if he could step away from his meteoric career in academia. Mung’s response was simple: “I need to serve my country. After growing up in China, I don’t take our freedom for granted. Let me talk to Mitch.”

The Playbook to Cascade the “T2” Equation

As Krach has always done building companies, he aligned his “E” team around a shared playbook—the mission, vision, principles, goals, and strategy. This would enable rapid scaling to drive their execution forward together into lines of effort, short term objectives, and action items. Krach knew it all boils down to execution, and that there was often a big gap in government between policy and execution. The playbook would provide the alignment to execute at scale with lightning speed.

The “E” Team Playbook formed the basis for what became the U.S. Global Economic Security Strategy (GESS) which consisted of three pillars. First, turbocharge economic competitiveness by driving productivity and access to capital, and accelerating the development of emerging technologies critical to economic growth and security. Second, safeguard critical American assets, such as intellectual property, supply chains, financial and education systems. Third, form a network of partnerships composed of like-minded countries, companies, and civil society partners that would operate by a set of trust principles in multiple areas of economic collaboration.

The GESS laid the foundation for many of the team’s notable accomplishments, and Taiwan was a critical component of their plans. They brokered an agreement with Taiwan’s TSMC, manufacturer of the world’s most sophisticated semiconductor chips, to build a massive $12 billion chip manufacturing plant in Arizona. As TSMC’s partners followed suit, it quickly became the largest onshoring in US history.

Later, on September 17, 2020, Krach made an historic trip that strengthened ties with Taiwan by attending the memorial service for former President Lee Teng-hui. He also attended a banquet in his honor hosted by Taiwanese President Tsai Ing-wen and Taiwan Semiconductor Manufacturing Company (TSMC) founder Morris Chang. Krach was the highest-ranking State Department official to visit the island in 41 years since the U.S. established diplomatic relations with Beijing in 1979.

Krach would meet with high-tech business leaders and top government officials, which resulted in Taiwan joining the Clean Network, formalizing an Economic Prosperity Partnership with the US, and signing a Science and Technology Agreement. Beijing made a dramatic show of its displeasure, greeting Krach with flights of 40 military airplanes and fighter jets over the Taiwan Strait. President Tsai would later remark “Under Secretary Keith Krach exemplified the remarkable possibilities of Taiwan-US economic relations,” and Taiwan’s Ambassador Hsiao Bi-khim dubbed Krach “Taiwan’s Number One Friend.”

The famed “E” Team lead other noteworthy GESS missions as they drove divestment in CCP companies to protect investors from unknowingly financing Chinese military and surveillance state; championed the human rights by mobilizing action against CCP’s genocide in Xinjiang; and served as the catalyst for the nonpartisan $250B USICA Act and built the Blue Dot Network as a unifying and equitable alternative to the One Belt One Road which was adopted by the G-7 in the Biden administration as the B3W. Part of the “E” team’s responsibilities included infectious diseases. So when the unexpected curve ball pandemic hit, the “E”  team spun on a dime and directed the repatriation of 100,000 United States citizens during the 2020 global pandemic, and expedited the delivery of 1 billion pieces of PPE.

Perhaps the “E” team’s most enduring legacy was giving hope to the allies of freedom around the world by proving technological authoritarianism is beatable. They did this through the Clean Network, which defeated the CCP’s 5G Masterplan, and proved that people straight out of the private sector can make a difference by their creating a new form of transformational diplomacy now known as Tech-Statecraft. The “E” Team certainly met the definition of transformational leadership.

Krach says, “A transformational leader challenges the status quo by inspiring, unifying, and empowering a team of people to achieve a noble cause that will have a profound, far-reaching impact.”

To the world, they are visionary innovators who create new realities. They see the ideal future they want to create; apply novel approaches to solve problems; grasp complex issues and uncover hidden opportunities; and build new things and leave lasting legacies. They are visionary, innovative, strategic, and enduring.

To themselves, they are principled revolutionaries who courageously achieve their goals. They hold themselves to the highest moral and ethical standards; defy convention and the status quo; master their fears in pursuit of their mission; and overcome all obstacles to achieve their goals. They are principled, challenging, courageous, and resilient.

Time for Scary Fun. Come on in, the water is just fine.

In Krach’s inspiring commencement address, his thesis was crystal clear: “The world needs more Trusted Transformational leaders than ever before.” And to be a transformational leader, he said, you need a diverse team—the true catalyst for genius. His charge to the graduates of his alma mater was unambiguous: “Jump in water over their head,” and grasp for the “scary fun” opportunities in life.

He ended with, “It’s now up to you to jump in that water over your head, and make the transformational magic happen, by trusting in yourself, and building Trust wherever you go. Come on in, the water is just fine. And you can trust there are a lot of us Boilermakers in there for you.” 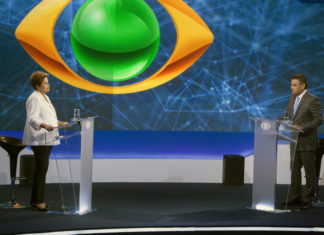 Staff Writer - October 23, 2014
By Christopher Wylde, Richmond American International University The Brazilian presidential election of 2014 has so far thrown up more surprises and plot twists than a...

What does the economy need now? 4 suggestions for Biden’s coronavirus...