By Peter Gray, University of Birmingham

Since the end of the Cold War, politicians have had recourse to air power on a number of occasions. The conflicts have varied in scale, duration and intensity. Air power played a huge role in the two Gulf Wars, in Kosovo and more recently in Libya. More recently still, the Royal Air Force deployed of Tornados at a base near Cyprus to conduct operations against the Islamic State (IS) in Iraq.

We have also seen air power in use to protect UK airspace, both on a routine basis and for specific events such as the 2012 Olympics and the 2014 NATO summit in Wales. While the use of air power isn’t new, or exclusively dependent on modern and sophisticated technology, how it has been used has changed over time. And the core roles that air force play today – control of the air, strike, reconnaissance and mobility – have their roots in the evolution of aviation before and during the World War I.

As with all aspects of historical study, many myths have grown around the earliest use of aircraft. One of these is the enduring, and slightly amusing, caricature of senior generals, including Douglas Haig, prophesying that aircraft could never replace the cavalry in reconnaissance of enemy positions.

In fact, aircraft were regularly to do this in large-scale army manoeuvres from 1910 onwards. And in the early days of World War I, the aircraft of the Royal Flying Corps were in use daily to monitor the movements of the German army in France and Belgium.

But as the benefits of “eyes in the sky” became increasingly evident to both sides, it also became obvious that steps would need to be taken to prevent the opposition from gaining significant advantage. The enemy would need to be shot down.

At first, this consisted of little more than pilots taking pot shots at each other with their service revolvers. But as technology improved, airframes became more manoeuvrable and engines more powerful it was soon possible to mount machine guns, and the age of air-to-air combat began. There was then a spiral of technological developments throughout the war as first one side and then the other gained ascendancy. Control of the air became paramount over the trenches and remains the case in every conflict undertaken.

Continual improvement of airframes also meant that crews could carry more effective weapons than simple hand grenades in their greatcoat pockets with which to harass the enemy. Recognisable bombs and bomb racks added the strike component to the roles of air power in warfare. This development took a sinister turn when Germany started long range bombing attacks on London with Zeppelins and then Gotha bombers.

Birth of an air force

“Total war” was now on the doorsteps of the family on the street. The inevitable hue and cry resulted in aircraft being withdrawn from the frontline to defend the city, and control of the air took on a new dimension.

Neither the Royal Naval Air Service nor the Royal Flying Corps relished the task of searching for enemy aircraft in the seemingly vast skies of southern England by day or night. But pressure from the UK parliament, and from the media, meant that the job had to be attempted.

Part of the fallout from the task of defending UK airspace was a formal report commissioned by prime minister Lloyd George, and written by General Smuts – hence its place in history as the Smuts Report – recommending the formation of an independent Air Ministry and Air Force. So the Royal Air Force became the world’s first independent air force.

During World War I, aircraft developed in size and power and had vastly improved handling characteristics. The inter-war period provided a great opportunity to use these developments. Airmail routes were opened, exploration flights carried out, records were set for transoceanic crossings and the pieces were all in place for an commercial airline industry to take off, both over the empire and over continental land masses.

But this also had a darker side as the technology necessary to convert passenger aircraft into long-range bombers was minimal. All was in place for the highly controversial bombing campaigns of World War II. It would then only take parallel developments in nuclear physics for the stage to be set for the attacks on Hiroshima and Nagasaki. The Cold War followed with the spectre of nuclear Armageddon ever present.

So from small beginnings, with simple and basic aircraft, World War I provided the catalyst for a rapid growth in design, technology, armaments and air power thinking, which continued unbroken for the next century and beyond.

In all historical studies, it is difficult to adopt, or appreciate, the mind set of our predecessors. A century on from World War I we still shudder at the scale of the casualties, whether in the trenches or in the air. And over the last decade, avoidance of casualties has proved to be a catalyst for the increased use of remotely piloted air systems – or drones. They are increasingly used for dangerous, dull and dirty operations in many parts of the world. Although still expensive to operate, they do not put aircrew in harm’s way and this has made them highly popular with commanders. This is likely to continue and trends in weapons design will also continue to improve making remotely piloted systems more likely to be the weapon of first choice.

The next big change, however, is possibly even more revolutionary than flight was a century ago: artificial intelligence that is sufficiently advanced for these machines to be able to operate completely independently. But if the day of the robot does come, will it be a step too far? 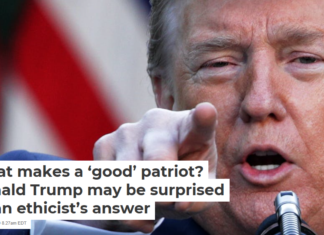 Staff Writer - October 3, 2020
Stewart Clem, Aquinas Institute of Theology When President Donald Trump talks about “patriots” – and he does, a lot – he probably doesn’t have in...