Flooding is a well-known natural hazard along the US coastline. Nearly 40% of the US population resides in its coastal counties.

A clear understanding of the various flood types and changes in the frequency of their occurrence is critical towards reliable estimates of vulnerability and potential impacts in the near-term as well as into the future. Given the heavy reliance on coastal zones for natural resources and economic activity, flood preparedness and safety are key elements of long-term resilience.

In a study published in the journal Nature Climate Change, we assembled long historical records of rainfall, tide gauge readings and hurricane tracks to assess the simultaneous occurrence of heavy precipitation on land and storm surges. The combination of these two – heavy rain and storm surges driven mainly by the wind from storms – can result in “compound” floods.

We found that along large coastline stretches around the US a systematic linkage exists between the two important drivers for coastal flooding, making it more likely that the two occur in tandem. Our analysis showed that over the past century, the number of compound flood events for many US coastal cities has increased.

Gaining more insight into the frequency and likelihood of compound floods can help planners better assess risk from flooding to critical infrastructure.

The interdependencies between storm surge and precipitation have long been neglected within flood risk analyses, where usually one of the two flood drivers was investigated in isolation. As a result, planners may have underestimated the actual flood risk.

Indeed, US Government Accountability Office, in a July 22, 2015 report titled “Efforts to Assess the Impact of Extreme Weather Events,” reviewed US Army Corps of Engineers efforts to integrate changing risk from weather extremes into planning and operations of water resource infrastructure projects. The report concludes: “As the frequency and intensity of some extreme weather events are increasing, without performing systematic, national risk assessments on other types of infrastructure, such as hurricane barriers and floodwalls, the Corps will continue to take a piecemeal approach to assessing risk on such infrastructure.”

The relationship between storm surge and heavy rainfall is stronger along the Gulf and Atlantic coasts – where tropical cyclones and hurricanes often produce large storm surges and also bring significant amounts of precipitation — compared with the Pacific coast.

In the face of storm surge flooding, heavy precipitation on the land serves to accentuate its severity and impacts. In other instances, storm surge simply elevates sea water levels enough so that gravity fed freshwater drainage is either blocked, slowed down or backed up. In this case, the inland flood potential rises dramatically and coastal communities face the prospect of malfunctioning stormwater and wastewater infrastructure.

Commingling of the storm surge effects with runoff due to heavy precipitation has a multiplier effect on coastal infrastructure. The impacts can range from washed-out bridges to sanitation and public health concerns due to overflowing wastewater systems. And any increase in sea level would worsen the impacts from storm surges.

Meanwhile, much of the infrastructure that deals with flooding could be greatly improved. The 2013 Infrastructure Report Card issued by the American Society of Civil Engineers assigned the following grades: Levees (D-), Ports (C), Wastewater (D), Roads (D).

With this daunting perspective in mind, we sought to quantify the frequency of occurrence of compound flood events, as gleaned from the historical record. We were seeking to learn the spatial patterns of the risk of compound flooding, as well as its temporal variability over the past century.

For many of the large cities, including Boston, New York City, Tampa, Houston, San Diego, Los Angeles and San Francisco, we found a shift toward storm surge weather patterns that also favor high precipitation. This makes it more likely now, compared with earlier in the 20th century, that concurrent extremes would occur.

For New York City, as an example, we identified the weather situations that typically caused compound events in the past and showed that those have occurred more often over the last few decades. As a result, certain scenarios of combined storm surge and rainfall became twice more likely than they used to be in the mid 20th century. We did not seek to attribute these trends to specific climatic phenomena but that would be an important next step.

Future research should also focus on the implications of those changes for flood risk noted in our study, including localized estimates of flood risk and the efficiency of countermeasures to mitigate the impacts of these events. At the same time, it will be important to identify linkages between the observed changes in dependency between storm surge and heavy rainfall and large-scale climate phenomena.

This, in combination with simulations performed with high resolution climate and hydraulic/hydrological models, will allow us to look into the future and define scenarios for changes in the compound flood risk. A better understanding of these heightened risks can then be integrated into coastal adaptation planning and resilience efforts. 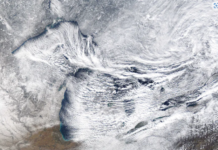 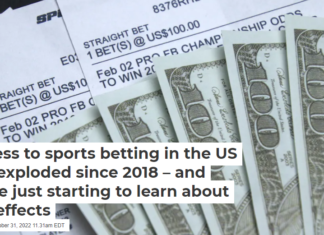 Access to sports betting in the US has exploded since 2018...