I was looking at the seafloor, focused on identifying fish species as I normally did when diving off of the California coast, when suddenly I felt something large above me. When I turned my head I saw a giant fish – more than 6 feet (2 meters) long – calmly interested in the air bubbles coming from my SCUBA regulator. This was 2016 and was my first encounter with a giant sea bass.

I am a marine ecologist, and I study how international borders pose challenges for conservation and management efforts in the marine environment. Although there are no walls or fences in the ocean, borders still act as stark barriers for a variety of things.

Giant sea bass live off the west coast of North America in both Mexican and U.S. waters. I have found that large differences in regulation and research effort between the two countries has led to a significant misunderstanding of giant sea bass population health.

The giant sea bass is the largest coastal bony fish in the Northeastern Pacific. It can grow up to 9 feet (2.7 meters) long and weigh up to 700 pounds (315 kg). It lives in coastal waters from northern California to the tip of the Baja California peninsula in Mexico, including the entire Gulf of California.

In California, commercial fishing for the species began in the late 1880s. Large fish used to be very abundant across the entire range, but the fishery collapsed in the early 1970s. As a response, in 1981 the U.S. banned both commercial and recreational fishing for giant sea bass, and there are many ongoing research and population recovery efforts today.

The collapse and subsequent protection and flurry of research in the U.S. stand in stark contrast to Mexico. In Mexico, there are minimal regulations on fishing for the species, and there is almost a complete lack of data and research on it – there are only three studies on giant sea bass with any data from Mexico.

The International Union for Conservation of Nature considers giant sea bass to be a critically endangered species due to the population being “severely fragmented, leading to a continuing decline of mature individuals.” But this decision was based on a report that had no data whatsoever from Mexico. This lack of data is concerning, considering 73% of the species’ range is in Mexican waters.

This knowledge gap made me wonder if ecologists had the wrong idea about the health of giant sea bass populations.

In 2017, I led an effort to document the giant sea bass population in Mexico and look for clues to what it was in the past. At the beginning of the project, my colleagues and I feared that the records in Mexico would confirm the precarious situation of the fish in the U.S. But the reality turned out to be the opposite.

To our surprise, we found giant sea bass everywhere in the fish markets and fishing grounds from our very first assessments. The fishmongers were never out of the fish; instead, they would ask us, “How many kilos do you need?” It was clear that for fishers in Mexico, the species is still common in the sea, and therefore, in their nets. It is still possible to find big fish up to 450 pounds 200 kilograms, and the average catch was around 26 pounds (12 kilograms).

It was fantastic to see an abundance of these fish in markets, but I also wanted to understand the fishery trends through history and how current fishing levels compared to previous years. I looked at historical and contemporary fishing records and found that the Mexican commercial fleet has caught an average of 55 tons per year over the past 60 years, and the fishery has been relatively stable over the past 20 years, with a peak in 2015 at 112 tons.

According to U.S. and Mexican records, the largest yearly catch ever recorded for giant sea bass in Mexico was 386 tons in 1933. Biologists consider a fishery to have collapsed when total catches, under the same effort, are less than 10% of the largest catches on record. So a steady trend of 55 tons per year shows that the fishery in Mexico has not collapsed. It is clear that giant sea bass populations have faced severe declines throughout their range; however, the health of the species is not as dire as thought.

Another interesting finding from my research is that the apparent collapse of the giant sea bass fishery documented in the 1970s actually began as early as 1932.

Over the first half of the 20th century, as the U.S. commercial fleet overfished U.S. waters, they began fishing in Mexican waters too – but they continued to count all catches as from the U.S. This changed in 1968 when the two governments signed the Mexico–U.S. Fisheries Agreement, limiting how much fish each country’s fleet could take from the other country’s waters. The collapse of the U.S. fishery in the 1970s was not due to a drastic reduction in fish numbers in Mexican waters, but driven by changes in fishing regulation between the U.S. and Mexico. The California fish populations had been depressed for decades, but this was hidden by fish from Mexico.

Based on my research, I believe that the giant sea bass may not qualify as a critically endangered species. My analysis of modern catch data suggests that the population of this iconic fish is likely much larger than biologists previously thought, especially in Mexico.

I am leading the next assessment for the International Union for Conservation of Nature, and now that we have accumulated better data, we can make a more informed decision that balances responsible management of the species with human needs.

I hope that our study inspires policymakers in the U.S. and Baja to start a conversation about how to manage this incredible fish in a collaborative way. But I feel our work also has larger implications. It shows how asymmetry in research and data can create significant barriers to understanding the past and present status of a species like the giant sea bass and make it harder to implement sustainable practices for the future. 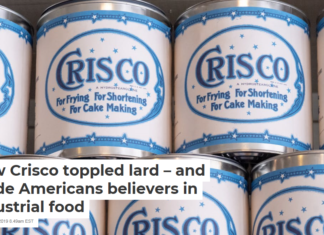 Staff Writer - December 18, 2019
Helen Zoe Veit, Michigan State University Perhaps you’ll unearth a can of Crisco for the holiday baking season. If so, you’ll be one of millions...